On 11 February 2021, the new Angolan Penal Code officially entered in force. This new legislation represented a major achievement for LGBTI people not only in Angola, but across the rest of Africa. It is important to highlight that, while the Penal Code was approved in Parliament in 23 January 2019, it was only officially published on 11 November 2020. Prior to this, the criminal legislation, the Portuguese Criminal Code (1886), inherited from colonialism, criminalised the “vices against nature” (art. 71)), a very vague formulation for deemed to refer to consensual same-sex conduct. Angola was the last of the African former Portuguese colonies to repeal the colonial legislation.

This decision was long-awaited by Angolan sexual minorities. For them, this new legislation represents a huge step towards equality. It does much more than simply removing the colonial criminalisation. It goes far beyond, protecting people from violence and discrimination. In the 2020 Penal Code, the words ‘sexual orientation’ are mentioned twelve times, in distinctive moments and specific type of crimes, which is indicative of the awareness of the Angolan legislature on this subject. Sexual orientation is an aggravating factor for several crimes as discrimination (art. 212) or incitement to discrimination (art. 380), injury (art. 213) and defamation (art.214), and corpse desecration (art. 223, in conjunction with articles 221 and 222). Sexual orientation is also included as a characteristic of persecution, which constitutes a crime against humanity (art. 382), protecting sexual minorities in times of extreme violence and internal turmoil. In sum, the Angolan legislation is not just about decriminalisation of same-sex conduct but also about protection against discrimination. It’s a comprehensive legislation that acknowledges the patterns of discrimination against marginalised people, in higher risk of violence, and ensures the right of every citizen to live without fear. Of course, this is not an automatic path, and society must follow this evolution, but that is one of the potentialities of the law. Despite the expected backlash from conservative movements inside Angola, the Penal Code may, and certainly will produce social change in time. 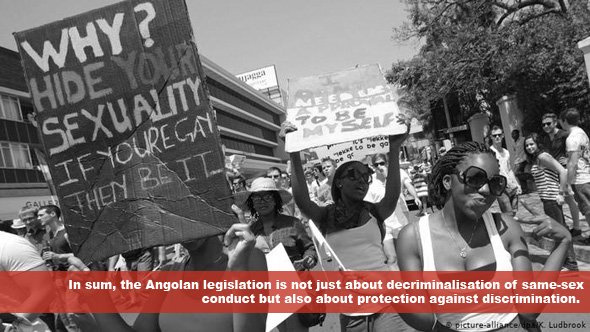 It’s important to mention that this transformation doesn’t happen in the vacuum. Several milestones, from social, political, and legal fields, happened in Angola in the last decade. In 2014, Angola hosted the 55th ordinary session of the African Commission on Human and Peoples’ Rights, at which the Commission adopted the Resolution 275 – Protection against Violence and other Human Rights Violations against Persons on the basis of their real or imputed Sexual Orientation or Gender Identity – the first soft law instrument focusing on the violence towards LGBTI people and in fighting accountability for SOGI hate crimes in Africa. In September 2017 João Lourenço was elected President, ending more than 37 years of José Eduardo dos Santos presidency. The Penal Code had been discussed since 2004, but its adoption in Parliament took place in the first year of the new presidency. When it was adopted, the Deputy President José Semedo – responsible for the drafting of the law that approves the Penal Code – said to a local news media that such legislation was the first drafted “by Angolans, for Angolans and Angola” and it reflected a “modus vivendi” of actual Angola.[1] In June 2018, and five years after the formal request, the LGBTI association IRIS Angola was legally registered.[2]

But Angola is not unique in Lusophone Africa. In fact, the repeal of colonial Portuguese Penal Code in Africa started in early 1990s’ in Guinea Bissau.[3] Cape Verde (2004), São Tome & Principe (2012) and Mozambique (2015) followed the same path. The case of São Tome highlights what we can understand as a pattern inside Lusophone Africa: the inclusion of sexual orientation as a characteristic that marginalises people and the need to protect them from violence. In fact, in 2008, the Santomean Parliament adopted domestic violence legislation which identified sexual orientation as of the factors leading to domestic violence. Recently, in 2018, the country adopted a new Labour Code, prohibiting discrimination of employees based on their sexual orientation. Similar provision is be found in Mozambican Labour Code (2007).

These legal developments in Lusophone Africa destroys the fable of the unAfrican nature of homosexuality. It also centres the issue in a human rights perspective of one´s freedom to live without discrimination. Other African countries must follow these examples to ensure the rights and dignity of their fellow citizens and guarantee their full citizenship, irrespective of their sexual orientation and gender identity.


Rui Garrido is a Ph.D Candidate in African Studies at Iscte – University Institute of Lisbon (Portugal). His research focus on human rights and sexual orientation in Lusophone Africa.