It was reported on 28 April 2021 that authorities in Lesotho could not appoint a new High Court judge because of a lack of funds. While this might have come as a shock to most people, this will not have surprised the authors of the Report on the Independence of the Judiciary in the Kingdom of Lesotho, published only a month earlier in March. Chaired by Justice Zak Yacoob, former South African Constitutional Court Judge, a Working Group of the Southern African Development Community (SADC) Lawyers’ Association had aired a trenchant critique of the current condition of judicial independence in Lesotho.

Opening with some general propositions on the principles of judicial independence and the separation of powers, the threats to the realisation of these principles in Southern Africa and the post-independence historical background in Lesotho, the Report moved on to the presentation of constitutional provisions which “speak to judicial independence”. There is, inter alia, commentary on the fragility of the Court of Appeals (including its substantial reliance on foreign judges and its lack of permanence) ( pp 14 and 50-57), the unsatisfactorily insecure status of the “Constitutional Court” (p 14), the executive domination (by King and Prime Minister) of the judicial appointments processes (pp 14-15), and the capacity for political manipulation of judicial appointments during the events of 2013-15 (pp 22-23, 49-50).

The Report then reverts to general considerations in an elaboration of “Best Practices and Guidelines”, principally by reference to the Lilongwe Principles, the Latimer House Guidelines and the Bangalore Principles; and some comparative material from Zambia, Zimbabwe and South Africa; before closing with an itemisation of the “Most Prevalent Threats” identified in Lesotho.

What is most striking about the Report is that, whilst judicial independence may, of course, be threatened by political abuse, the dominant theme throughout is the threat posed by the lack of resources. The impermanence of the Court of Appeals derives from payment of judges by stipend or sitting allowance rather than salaries, in part at least, to save money (pp 14, 57). There is a lack of proper facilities and resources, and poor salaries for High Court judges, one consequence of which has been a failure to attract private sector applicants but instead compelling reliance on registrar and magistrate applicants (p 15). Section 5(4) of the Report on “Funding of the Judiciary” exposes the lack of a guaranteed level of funding provision – “the fact that the judiciary is solely reliant on the Executive for its funding and at the mercy of the Executive for the allocation of its budgets negates the independence of the judiciary” (p 21).  “Best Practices” include the need for adequate judicial resources including security of tenure, conditions of service and remuneration “to utterly secure economic independence” (p 30). 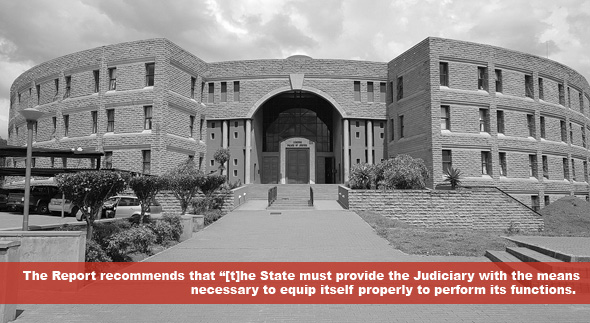 The Report recommends that “[t]he State must provide the Judiciary with the means necessary to equip itself properly to perform its functions. To do so, the judiciary must be able to advocate for, and motivate its needs in terms of budget, material and human resource needs. The funds allocated to the judiciary must be properly utilised and safeguarded from alienation or misuse. The availability of funding to the judiciary should not become a weapon to be used [sic] as a means of exercising improper control over the institution” (p 39).

In the light of those overall conclusions suggesting a systemic under-resourcing of the judiciary in Lesotho, it is no great surprise that, as reported, according to the Lesotho authorities: “Appointing a judge for Tšifa-li-Mali means that judge needs a place to stay in Leribe, transport for the judge and other senior staff and that all needs money which we currently do not have. That is why we had to stop the process so we can seek the funds.”

As the SADC Report demonstrates, the consequences of under-funding spread much more widely across the system and impinge directly on the features impacting on independence. To an extent this is merely to demonstrate a wider truth. No rules and institutions intended to secure constitutional rights and standards are cost free and their realisation will also depend on funding Separating powers and creating institutional autonomy cost money.

But it has also to be wondered whether even more fundamental questions are posed by the example of Lesotho? Is it possible to go beyond the generalities of an insistence on “satisfactory” or “adequate” funding and to specify with more precision minimum funding standards in particular jurisdictions? In the absence of such specificity, will it ever be possible to analyse the consequences of funding failures or to be seen to be applying internationally ordained standards at all? In conditions of crisis for the funding of all public services – by no means always the case where state funds (world-wide) are diverted from the judiciary in the pursuit of (sometimes malign) political choices – can judicial independence ever be funded?

Chris Himsworth is Emeritus Professor of Administrative Law at the University of Edinburgh, United Kingdom and author, with Christine O’Neill, of the fourth edition of Scotland’s Constitution: Law and Practice (Bloomsbury Professional, 2021). During 1970-73 he was a lecturer in law at the University of Botswana, Lesotho and Swaziland.