The Role of ICT in Promoting the Rule of Law

Various scholars have defined the phrase from different perspectives, therefore, defining rule of law in a universally agreeable manner is not an easy task. The most known definition is the one provided by Aristotle: “Rule of law is an absence of rule of man”. But this definition is very general with the need for elaboration. A more elaborated, perhaps understandable, definition of rule of law is by Lord Bingham, essentially said that “…all persons and authorities within the state, whether public or private, should be bound by and entitled to the benefit of laws publicly and prospectively promulgated and publicly administered in the courts”.

In rule of law, there is no discrimination based on anything; all should abide by the enacted laws and whoever disobeys it must bear the consequence. In this regard, Trevor Allan, a 20th century political philosopher, stated that “the law, always, has to safeguard the governed from the governor by shielding the individual from hostile discrimination by the holders of political power”. Furthermore, rule of law is one of the manifestations of good governance. In this regards, the Organization for Economic Cooperation and Development (OECD) has indicated that good governance is characterized by participation, accountability and transparency, rule of law, effectiveness, and equity. So, ensuring rule of law is vital in bringing accountable, transparent, participatory and effective governance system which in turn could bring overall development.

There are different means to promote rule of law, including the use of ICT. The OECD highlights that ICT plays a significant role in the respect of rule of law so that good governance will be achieved. There are different ways by which ICT plays this role in the respect of rule of law. ICT makes laws easily accessible, flexible, easily applicable and coordinately implementable so that rule of law will be enhanced. In essence, ICT makes legal rule visible to the public through online availability of relevant legislation. Recently, it is easy to access laws enacted by parliaments on the internet, which helps people to understand the consequence of their actions; so that they may be deterred if the acts are unlawful. In addition, ICT also provides citizens access to information about court procedures. In this regard, using ICT, citizens easily understand the jurisdiction, power and function of courts which is as important as knowing substantive rights. Furthermore, it is believed that “judicious and well-informed decision-making is dependent on the quality and timeliness of information”.  ICT also makes the law flexible by assisting the legislator or executive to gather information about the possible implication of enacted laws in the society. ICT will significantly reduce time and energy in the study of the impacts of enacted laws. ICT also make laws easily applicable. There are laws which need technologies to be implemented; for instance, the tax laws need computerized system to cope with the change in the system of tax related frauds, traffic rules of speed limits also needs new technologies to be effectively implemented.

The other importance of ICT in the respect of rule of law is the fact that it helps various laws to be implemented in coordinated manner. For instance, ICT can help create mega data systems necessary for inventory taking of property for the purpose of assessing property tax.  In addition, ICT can help in identifying crime suspects by designing systems which loads various information of individuals like crime record and other important information. 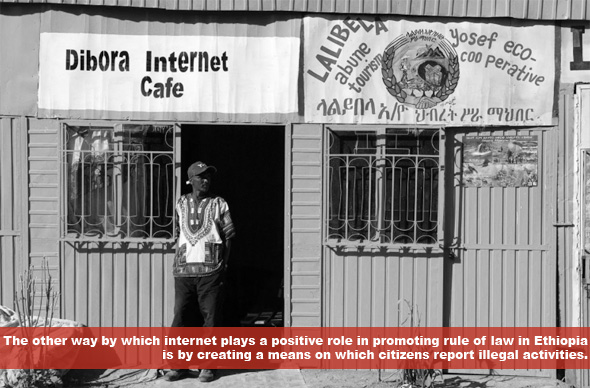 Rule of Law in Ethiopia: The Impact of Social Media

Rule of law is central for democratic order and respect for human rights. It is also important to establish law and order. The existence of rule of in a country shows the legitimacy of government by making all the stakeholders subject to laws.  When citizens believe the government is legitimate, they demonstrate it by respecting the laws enacted by its organs. This illustrates that legitimacy of government is a cornerstone of good governance. If the government’s laws are not respected, there would definitely be use of unnecessary force to compel citizen to follow legal orders which will create instability. The instability is, however, the source of ‘bad government’ i.e. violations of citizens basic rights, corruption and crime.

The role of ICT in general and internet in particular in promoting rule of law in Ethiopia is therefore immense. There are two ways by which Internet will help on this regard. The first is by serving as a medium of communication to enlighten citizens about the laws of the country. In law, there is a well-known principle that ‘ignorance of law is not an excuse’ for a person to escape punishment/liability.  Even though this principle makes a person liable despite not knowing about the law which prohibits the act, for the purpose of good governance knowing about the law is very crucial. This is because it helps citizen to understand the existence of laws and the consequence thereof. Thus, various law blogs, websites, and social media pages can play important roles in awareness creation about legal rules in Ethiopia. In addition, they will also help in informing the public about any changes regarding the existing legal order. Furthermore, ICT can serve as a medium through which a draft bills can be discussed for possible input from the society. In this instance, we can take the recent process on certain legislations after the government’s reform measures as an example. For example, the committee established by the government to facilitate the revision of civil society proclamation and anti-terrorism proclamation received comments from social media, letting people known about the process, conducting public discussion and transmitting it on TV and Radio.

The other way by which internet plays a positive role in promoting rule of law in Ethiopia is by creating a means on which citizens report illegal activities. With the introduction and growth of internet service, citizens and to a very large extent, civil society representatives like NGOs, human right activists, and various political actors have developed the habit of reporting activities of rule of man. Massive illegal activities which resulted for massive human right violations, like the internal displacement of Gedeo people, the internal displacement of Oromos following the inter-communal conflict between Somalis and Oromos, and more recently, the various human right violation in most part of the county particular in Benishangul-Gumuz, Tigray, Oromia, and Amhara regions have been reported using ICTs.

However, ICTs, particularly the internet, has also had a negative impact on the promotion of rule of law in Ethiopia. For instance, following the recent political changes, most government institutions have lost their legitimacy. As a result, mass atrocities and internal disturbances have become common in Ethiopia. The negative role played by social media through the dissemination of hate speech about the people targeted is immense in this regard. The emergence of various extreme informal groups in different parts of the country has also exaggerated the situation. In some instances, the groups have been seen taking over the natural duty of government by directly and indirectly forcing government officials towards their goals. Consequently, this led to the conflict between individual rights with group rights which in the meantime resulted in annihilation of rule of law.

ICT plays a great role, both positive and negative, in the respect of rule of law in Ethiopia. By serving as a medium of communication to enlighten citizens about the laws of the country and the changes thereof, by creating a platform through which a draft bills can be discussed for possible input from the society, and by creating a means on which citizens report illegal activities, ICT plays positive role in the promotion of rule of law. However, care must be taking to ensure that the same media are not weaponized to undermine rule of law in Ethiopia.