Leaders of the Southern African Development Community (SADC) met again on 23 June 2021 in Maputo to discuss the expanding insurgency in northern Mozambique. It’s the first time the Summit has met since a technical assessment to Mozambique recommended a 3000 strong military deployment. In a communique issued following the meeting, the SADC Summit – its highest decision-making body – endorsed the recommendations made by the technical assessment and approved a mandate for the SADC Standby Force Mission to Mozambique.

From domestic grievances to terrorist acts and foreign aggression

Now approaching its fourth year, the conflict in Mozambique has raged across Cabo Delgado, its northern most province neighboring Tanzania. Initially, the Mozambican government seemed to brush off the violence as local criminality. In the last year and a half however, it has consistently re-framed this narrative as one of ‘foreign aggression.’ Both arguments have merit; there is ample research to suggest the drivers of the conflict are placed with a sense of neglect by the government together with high levels of poverty and unemployment. At the same time, the conflict is being internationalised with some evidence of foreign fighters joining the ‘insurgency’, which has since become known as Ansar al-Sunna. Further yet, the group’s pledge of allegiance to the Islamic State (IS) in 2019 and the US designation of ‘ISIS-Mozambique’ as Specially Designated Global Terrorists may be playing into Maputo’s newfound narrative: that the conflict is not rooted in domestic issues but constitutes an act of aggression against Mozambique’s sovereignty.

Mozambique’s position on the conflict was bound to make its way to SADC. Therefore, Mozambique’s narrative is now likely SADC’s narrative; if it has any hopes for cooperating with the country against Ansar al-Sunna. Prior to its more active role, the block seems to in part have been paralysed by two dominant issues. The first was Mozambique’s seeming reluctance to accept regional military support. The second is whether it can at all provide the required support Mozambique needs to counter the growing threat in Cabo Delgado. For its part, SADC has firmly positioned the conflict as a situation of terrorism. Its communiques have consistently referred to attacks and acts of sabotage perpetrated by ‘terrorists’, ‘acts of terrorism’ and more recently, ‘violent extremism.’

Although the more robust details of the deployment are yet to be made known, what is clear is that if SADC is to deploy troops to Cabo Delgado, it will need Mozambique’s cooperation. Consequently, the proposed deployment will most likely be considered anti-terrorism in nature. Even if one accepts this narrative and despite numerous other factors to the conflict, the SADC of today has never before engaged with such a situation. That’s not to say that Southern African states have never dealt with conflict such as terrorism before; South Africa’s apartheid regime having waged its own extensive terrorism tactics against states in the sub-region. It is in part because of the apartheid regime’s existence that SADC’s predecessor, the Southern African Development Coordination Conference was first established. That was however five decades ago, with aims of regional integration, national independence and reducing neighboring states’ dependence on apartheid South Africa. 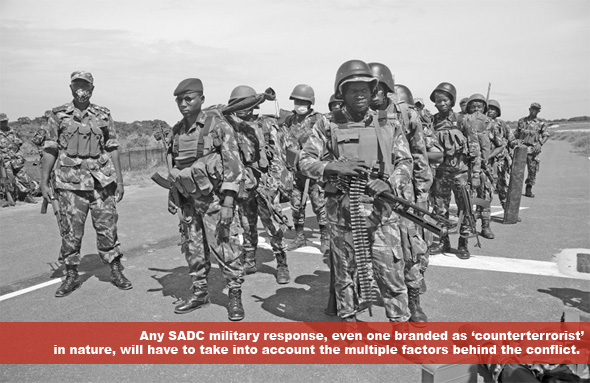 Since its establishment, SADC has only ever undertaken three military interventions and two of these occurred some two decades ago. Its intervention in the Democratic Republic of the Congo (DRC) in 1998 was predominantly an effort by Angola, Namibia and Zimbabwe to assist the DRC against rebel forces from Rwanda and Uganda. Since then, three SADC states are involved in the United Nations Stabilisation Mission in the DRC. Its intervention later that year in Lesotho was a result of a coup, in which South Africa and Botswana intervened. The bloc only intervened again in 2017, for a second time in Lesotho following serious political instability. Although this most recent intervention was able to stabilise the situation, its 1998 intervention in Lesotho was considered less than successful.

An expanding and intensifying conflict

Whether it is up to tackle the latest risk to regional peace and security remains uncertain. What is certain however is that the threat to the region is very real and should not be underestimated. The Armed Conflict Location and Event Data Project estimates some 807 attacks have taken place in Cabo Delgado, with more than 2600 deaths; 1300 of those being civilians. The UN High Commissioner for Refugees has in addition recently warned of the ongoing humanitarian crisis in the province, indicating that one million people could soon be displaced by the conflict. That number currently stands at 700 000.

Just as alarming is the fact that in the last year alone, the conflict has significantly intensified. The 27th report of the Analytical Support and Sanctions Monitoring Team of the UN Committee on ISIS, al-Qaeda and its affiliates indicated that Ansar al-Sunna ‘seemed to have acquired sophisticated operational capabilities and pursued a strategic intent to seize more locations and expand operations to other districts and provinces.’ Not to mention that the group has already conducted at least one cross border offensive in Tanzania in addition to a number of attacks against offshore islands in the Quirimbas Archipelago.

The threat posed by the conflict to both Mozambique and the sub-region is therefore undeniable. Any SADC military response, even one branded as ‘counterterrorist’ in nature, will have to take into account the multiple factors behind the conflict. If it does not, military action may not only fail to halt the conflict but exacerbate it. In addition to any efforts that may be directed against Ansar al-Sunna, SADC will also need to ensure a robust capability to assist the local populations most affected by the conflict. Both these aspects will no doubt entail adequate resources and serious funding– something that SADC is not necessarily well equipped with. In addition, the Covid-19 pandemic continues to take its own toll on the region; SADC member states have spent tremendous resources in combatting its effects. South Africa, for example, deployed 73 180 members of its defence force to enforce lockdown regulations to combat the pandemic last year at a cost of R4.59 billion. In addition, the country’s continued fiscal challenges have seen proposed budget cuts to its defence sector.

Beyond the required resources and financial commitments, there remains the acute threat that any SADC military involvement in Mozambique may result in or inspire terrorist attacks within contributing member states. In July last year, following discussions between South Africa and Mozambique on possible assistance to combat the conflict, the IS central media office, Al Naba, openly threatened retaliatory attacks on South African territory should it become involved in the conflict. A question for debate is whether South Africa or other SADC members have the required capacity to identify and counter potential terrorist acts on domestic soil. Weakened State institutions especially those of domestic policing authorities and intelligence agencies, widespread illicit arms trades, and porous borders suggest neither South Africa nor other neighboring states currently possess the capabilities to effectively counter domestic threats of terrorism.

Considering the history of SADC’s military interventions combined with the financial and logistical resources required, as well as threats associated with any potential deployment, it comes as no surprise that experts and analysts alike have cautioned against a hasty military response (see here, here and here). Whether or not SADC’s actions may be perceived as its own war on terror, any potential deployment may severely complicate the ongoing crisis and open further avenues of conflict. At the same time, SADC can no longer remain a spectator to a situation which threatens regional peace and security and it has the responsibility to take appropriate and measured actions. Military action, however, should always remain a last resort in any response to conflict situations.

Marko Svicevic is a post-doctoral research fellow at the South African Research Chair in International Law (SARCIL), University of Johannesburg.