Africa is undoubtedly a continent rich in natural resources thanks to its subsoil which abounds in 30% of the world’s mineral resources. However, these resources have not allowed the long-awaited development of the continent to be achieved. These resources have also become the main sources of conflict on the continent. Indeed, the presence of significant natural resources on the territory of a State increases the risk of armed conflict. They can motivate secessionist demands, finance rebellions or even stir up violence. According to the United Nations Environment Program (UNEP), natural resources are associated with 40% of internal conflicts around the world. It is in this sense that in Africa, we have been witnessing for some time now, the development of an economy of armed conflict.

War economy is a practice of enrichment linked to war. It refers, in the African context, to the predation of natural resources and illicit trafficking. The predation of natural resources is a means for the actors involved in armed conflicts to ensure their prosperity, and sustain their ability to continue to engage in armed conflict. It is carried out through looting and direct exploitation which necessitates occupation of production regions and transport roads.

The importance of this control has impacts on the areas of troop deployment and the intensity of fighting. The strategy adopted by armed groups is akin to the establishment of strong insecurity through a significant mobilisation of armed troops, who have the task of increasing the number of patrols. In this regard, there can be violence exerted on the civilian populations and clashes with the armed forces of the state which contributes to making the production areas hostile.

Thus, once the belligerents have had control of natural resources, “the political motivations of the war give way to economic motivations”. This makes it difficult to end the conflict, as the income from natural resources not only makes it possible to glorify warlords but also to recruit men or pay for armaments in order to maintain their power. Also, this wealth is beneficial to several other actors such as foreign companies, arms dealers and often neighboring states which provide material and financial means to rebel groups in return for natural resources. 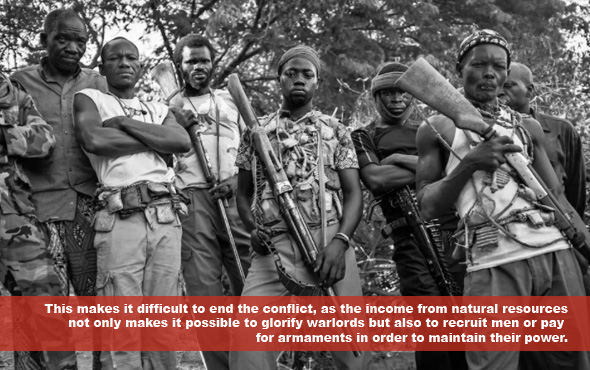 The involvement of companies has been widely recognised by the international community through, the revelation by the United Nations in 2002, of a list of eighty Western companies linked to the illegal exploitation of natural resources in the Democratic Republic of the Congo (DRC) only. Thus, as long as this situation allows the enrichment and impunity of the various actors, it is not easy to return to the statu quo. Consequently, despite the pacification efforts carried out at both the international and regional levels, conflicts persist and become of “low intensity”.

The war in Kivu is a perfect illustration of this phenomenon. The region was plagued by land tensions before experiencing an internationalised conflict from 1998 following the interference of neighboring countries (Rwanda, Uganda and Burundi) and the requested intervention of two States (Zimbabwe and Chad). Thus, this internationalisation highlights the issue of natural resources which have become the counterpart of military aid and the source of financing the cost of the occupation led by Rwanda, Uganda and Burundi.

However, even with the withdrawal of foreign troops in 2003, resources still continue to be “the sinews of war” with a proliferation of armed groups. Outside the DRC, several African countries have experienced this practice of predation and looting, notably Liberia, Sierra Leone and the Central African Republic (CAR), hence the designation ‘natural resource curse’.

However, this curse should be put into perspective because the impact of resources on geopolitics depends on several factors, including in particular, the failure of states to control their territories, poor governance and the accessibility of natural resources. It should be noted that the most coveted sectors are those from which the minerals are extracted at low costs through artisanal methods.

In view of the situation, it appears necessary to take political and legal measures aimed at preventing and contributing to the resolution of the current crises. In this sense, States are urged to ensure better management of natural resources likely to promote national development, because in reality several internal conflicts are linked to economic interests resulting from a poor distribution of public goods. Such an approach should be followed by the development of a legal framework to effectively combat economic crimes perpetrated by natural and legal persons.

Boubakar A. Mahamadou is a graduate in International Humanitarian Law from the Swiss Umef University.