South Africa’s local government elections, to elect the municipal tier of government, are constitutionally mandated through section 159 of the Constitution of South Africa to take place every five years. These elections were scheduled to take place towards the end of 2021 and have been the subject of great deliberation in the nation. Conducting elections during a pandemic has been the subject of much debate on the continent and worldwide, with certain countries choosing to continue with elections amid the pandemic and others choosing to postpone their elections amid concerns of the risks involved. Nations on the continent that have held elections during the pandemic include Zambia, Malawi, Ghana, Rwanda, Uganda and Côte d’Ivoire. Given the extent of the risks of holding elections during the pandemic and mixed calls on whether to postpone or continue with elections in the nation, the Independent Electoral Commission (IEC) of South Africa ordered an inquiry commission to determine the nation’s capacity to hold free, fair elections during the initially scheduled period in October.

The inquiry was established in terms of the Constitution and the Electoral Commission Act. The inquiry led by former Deputy Chief Justice Dikang Moseneke heard submissions from various stakeholders including political parties, medical experts, the public, civil society organisations and organised media, organised business, labour, the National Economic Development Labour Council, and a public opinion survey on issues relating to the free and fair nature of elections and the implications of postponing the upcoming local government elections. The findings of the inquiry culminated in a report that concludes based on the submissions given by the relevant stakeholders that ‘it is not reasonably likely’ that elections held in October would be free and fair. The report also concluded that the likelihood of a free and fair election would be increased if elections were postponed to a later date.

The report produced by the inquiry merely has advisory force on the IEC. As such, the recommendations and conclusions therein did not have binding or legal force regarding how the IEC proceeds in preparation for elections. The report outlines guidelines in which elections can be held in a free and fair manner amid COVID-19 pertaining to several electoral processes, including the pre-and post-voting phase of elections. The report further recommended that in the event that the IEC agrees with the postponement of elections, the Commission should approach a competent court to seek an order to defer the elections to a later date, before February 2022. 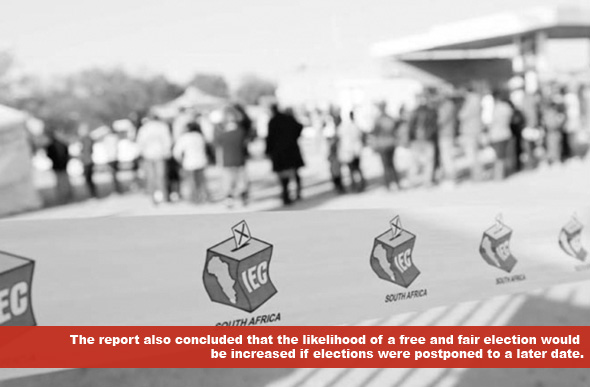 The IEC approached the Constitutional Court on an urgent basis to postpone the local government elections, based on the findings of the Moseneke Report. The decision to approach the Court in the matter relating to the postponement of the elections to ensure that this is a decision taken by the courts was welcome to safeguard the impartiality of South Africa’s democracy and ensure that this process was not open to the ills of political manipulation. The Constitutional Court granted the application to approach the Court on an urgent basis but dismissed the postponement application. The Court subsequently declared the proclamation of the election date by the Minister unconstitutional and set this date aside, with the effect that the Minister was mandated to make a subsequent proclamation in line with the Court’s order to hold elections between the 27 October and 1 November 2021.The decision also mandated the IEC to determine whether it is possible to hold a voter registration weekend after which the Minister is mandated to make a formal proclamation of the election date.

In answering the first question, the Court held that the decision to continue with elections is within the jurisdiction of the competent bodies within a state; the Court opined the same in relation to the postponement of elections. The Court held that in the absence of guidelines relating to the postponement of elections, states should follow guidelines applicable to conducting elections in an emergency situation. This process should be carried out with due regard and consultation with various stakeholders to ensure that the process is inclusive. Regarding the second question, the Court held that states remain bound to allow for their citizens to participate in the government of their countries and that this should be done as set out in the African Charter, the African Charter on Democracy, Elections and Governance and other legal instruments. The Court opines that elections can be held during the COVID-19 pandemic, however, due regard must be given to maintaining the integrity of the electoral process, and appropriate measures to safeguard the right to life must be implemented.  In answering the last question, the Court reiterated the legal standards upon which a postponement of elections can be based and outlined that this must be done only to safeguard the health of the citizens as well as create conditions that allow for free and fair elections. The Court cautioned against states using the postponement of elections to further undemocratic practices. To this end the Court provides guidelines to supplement domestic laws of nations addressing specific criteria relating to the postponement of elections and applicable standards in the event of the term of office of elected officials expiring without elections having been held. .

The recommendations tabled before the IEC in the Moseneke report are in line with international best practice, including the incorporation of the guidelines as provided by the African Court in the advisory opinion relating to elections held during a public health emergency. As with the guidelines of the African Court, we see in this report the need for a balancing of rights when making decisions pertaining to elections during the COVID-19 pandemic. Democracy based on universal adult suffrage is enshrined in the Constitution of South Africa as a founding principle. It has been well documented in the report and in various stakeholders’ opinions that this principle should not be undermined. The rights to vote in elections and stand for the public as provided for in the South African Constitution and the right to participate in the government of ones’ country as provided for in the African Charter for Human and People’s Rights are essential to the functioning of democratic states they should be upheld and protected as far as possible. However, the pandemic poses serious risks to the right to life, which is held as the most important right insofar as being the baseline to the enjoyment of other rights. The processes through which the inquiry’s decision and recommendations were reached embodied democratic principles with input from the public and various stakeholders.

The IEC and the Minister accepted and complied with the Court’s order. The IEC subsequently announced a voter registration weekend set for 18 and 19 September 2021. The minister made a preliminary proclamation of a new election date to be confirmed after the registration weekend as 1 November. The acceptance of and compliance with the decision of the Court is a testament to the functioning principles and respect for the rule of law and separation of powers in South Africa.

Local government is the sphere of government that is responsible for provision of service delivery in South Africa. The effect of postponing elections would have led to expiration of the terms of municipal leaders, ultimately affecting the provision of efficient service delivery, a problem which is already rampant in the nation. The decision to continue with elections and for this decision to be taken by the courts is essential to protecting electoral integrity and against incumbents using COVID-19 to entrench themselves. The decision to continue with elections requires balancing the socio-economic, political, and health concerns that prevail around holding an election during the pandemic.

Regular free and fair elections are essential to the functioning of South Africa’s democracy, and South Africa will now be one of several nations on the continent and worldwide to hold elections amid the COVID-19 pandemic. As the nation gears towards elections during the pandemic, it is essential to uphold the principles of democracy, transparency, and fairness to ensure that the electoral process remains a legitimate form of expression of the majority of citizens. The electoral processes, including registration and campaigning, should be conducted fairly that allows for equitable participation of the population and political parties. It is equally essential to take the various measures to ensure the safety of the masses as they participate in the various electoral processes; it is important that the state balances the right to life and the right to vote in a manner that promotes meaningful democratic expression while protecting the population from the risks associated with COVID-19.

Tariro Sekeramayi is an LLM (Multidisciplinary Human Rights) candidate at the Centre for Human Rights, University of Pretoria and a Project Intern at the Centre’s Democracy and Civic Engagement Unit.