Ethiopia revised its Criminal Code in 2004 and criminalised homosexual or indecent acts both between men and women,  with those convicted facing terms of imprisonment.[1] Same-sex acts will be punished with imprisonment of not less than a year, or in ‘grave’ cases, rigorous imprisonment of up to 15 years.[2] The justifications for criminalising the acts are mostly associated with the strict societal norms and religion.

There is no study or research conducted to know the exact number of LGBTQ people in Ethiopia. I interviewed two members of the LGBTQ in Ethiopia who are working in legal and health professions when I was writing a Seminar Paper for my LGBTQ Health Law and Policy class.[3] My informants told me that the estimate data shows that there are around 50,000-60,000 people who identify themselves as LGBTQ in the capital Addis Ababa alone.[4] They also stated that the major source of the anti-gay sentiment originates from the religious authorities.[5] This is because homosexuals are always portrayed in a dangerous manner by the religious institutions as child abusers and destroyers of Ethiopian values.[6] An Ethiopian law professor states the influence of religious groups in the following words:

“There is complete silence around LGBT experiences because there is no forum for stories about the violence meted out by the state and family members on a day-to-day basis… My biggest fear is that these religious organisations are monopolising the conversation and perpetuating a fear that is becoming impossible to combat.”[7]

The Stand of the Ethiopian Government towards LGBTQ Issues

In Ethiopia, it is rare to hear the views of government officials on LGBTQ people or the laws that ban homosexuality. However, there was a very controversial incident involving the then Minister of the Ministry of Women and Children Affairs, Mrs. Zenebu Tadesse, in 2014.  She openly slammed Uganda’s anti-gay law on her social media account but due to the pressure and backlash from the community and people from top political sphere, she was forced to delete her account.[8]  Later, she was forced to retreat and make a subsequent official statement.[9] I think, the retreat is a clear indication of the level societal and religious influences on a person’s freedom of expression. 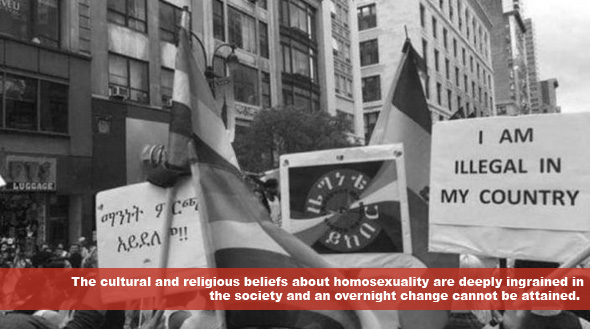 Interestingly the Minster got support from the representative of Human Rights Watch, Dr. Daniel Bekele who is also an Ethiopian about her progressive comment in relation to Uganda’s law.[10] Dr. Daniel himself was appointed as Chief Commissioner of the Ethiopian Human Rights Commission in 2018 following the coming into power of Prime Minister Abiy and is still actively serving. The Commission has a duty to ensure that laws, regulations and directives as well as government decisions and orders do not contravene the human rights of citizens guaranteed by the constitution of Ethiopia.[11] But most importantly the Commission has a clear mandate to make recommendations for the revisions of existing laws, enactment of new laws and formulation of policies.[12] As part of the recommendation duty, the commission can make a recommendation for the decriminalisation of homosexuality in Ethiopia.[13] It is nearly three years since Dr. Daniel took the office but no action has been taken nor has he made a single statement regarding LGBTQ issues so far.

In January 2021, the Human Rights Committee also identified the list of issues that Ethiopia must address in relation to non-discrimination based on sexual orientation and gender identity when it considered Ethiopia’s second periodic report.[14] The Committee seeks to know whether Ethiopia intends to consider decriminalising sexual relations between consenting adults of the same sex. It also required Ethiopia to indicate the measures taken to address social stigmatisation, harassment, violence and discrimination against LGBTQ people.[15]

In considering the way forward, the most important measure has to be decriminalising consensual same sex relations in Ethiopia. This is a recommendation continually given to the Ethiopian government by the Human Rights Committee and also raised in all the three UPR cycles. Classifying abuse against LGBTQ people as hate crime can also play a vital role in ending the stigma and discrimination faced by LGBTQ people in Ethiopia.

The cultural and religious beliefs about homosexuality are deeply ingrained in the society and an overnight change cannot be attained. However, continuous engagement and sensitisation efforts involving religious, customary and political leaders can help to make the LGBTQ issue open for discussion. We can take inspiration from the women’s rights movement that has achieved a lot in tackling discriminatory laws and practices to improve the position of women in every aspect of society. The equality provisions and the affirmative action clause in the constitution have helped more women to participate equally with men both in public and private spheres.

The government must enact a law that prohibit discrimination against LGBTQ individuals. As the stigma and discrimination against LGBTQ people is deeply ingrained in Ethiopia, the general equality clause provided under article 25 of the Constitution would be inadequate to protect their rights. The specific constitutional guarantees to women and children rights have brought a significance advancement in promoting as well as protecting their rights. To make the same progress the government must come up with a federal legislation that can clearly protect discrimination based on sexual orientation and gender identity and expression.

The Ethiopian Human Rights Commission should use its clear mandate to protect and promote the rights of LGBTQ people in Ethiopia. It can use this mandate to recommend that the federal government decriminalises homosexuality as it clearly goes against the object and purpose of many of Ethiopia’s undertakings under international human rights law and the 1995 constitution of Ethiopia. The Commission should also investigate alleged reports of violence against LGBTQ individuals on its own initiation, because reporting has been limited due to fear of retribution, discrimination or stigmatisation. The commission can also use its promotional mandate and work in a coalition with civil society organisations to facilitate human rights awareness raising events to the public on issues including LGBTQ rights based upon the well-articulated Yogyakarta principles.

Finally, courts need to uphold the constitutional rights to equality and non-discrimination and quash any law, policy or decisions of any organ unconstitutional that contravene these rights. The hate crime laws, or other criminal justice mechanisms should be interpreted in a way to aid the investigation of abuses against LGBTQ individuals.

[2] Id, the code provides that “whoever performs with another person of the same sex a homosexual act, or any other indecent act, is punishable with simple imprisonment.”

[5] I conducted the interview using the app called Signal which is, privacy-focused messaging and voice talk, on April 07, 2021 at Virginia, US.

[9] Id. She later said “I am really saddened and traumatised by the action of the hackers, this is neither mine nor the government’s view, homosexuality is a crime under the Ethiopian criminal code. How can I say this? It does not even fit with my personality at all.”

[11] Article 6(2) of the Ethiopian Human Rights Establishment Proclamation 210/2000. Available at https://www.cardeth.org/wp-content/uploads/2014/05/ethiopian-human-rights-commission-procl.pdf. The establishment proclamation was amended by proclamation number 1224/2020. The new law added important roles in situations of election monitoring, State of Emergency and visit and monitor correction centers or detention facilities without prior notice. Available at https://chilot.me/wp-content/uploads/2021/06/Ethiopian-Human-Rights-Commission-Establishment-Amendment-Proclamation-No.1224-2020.pdf

[12] Article 6(7) also gives it a mandate to forward its opinion on human rights reports to be submitted to international organs.

[14] Human Rights Committee List of issues in relation to the second periodic report of Ethiopia, adopted at its 130th session (12 October–6 November 2020).

[15] Para.5 of Human Rights Committee List of issues in relation to the second periodic report of Ethiopia, adopted at its 130th session (12 October–6 November 2020). The committee also recommends Ethiopia to combat and prevent homophobic and transphobic rhetoric by politicians and other public officials and encourage the reporting of acts of violence and discrimination against LGBT individuals, investigate all allegations of such acts and prosecute and punish perpetrators.

Rehim Baharu Elala is a human rights attorney and women’s rights advocate based in Ethiopia. Prior to obtaining his Master of Laws degree from Georgetown University in 2021, he was dedicated to challenging local norms surrounding men’s involvement (or lack thereof) in feminist organising. First advocating for gender equality at his school’s legal aid office, Rehim went on to assist in landmark cases that established more equitable approaches in divorce proceedings in Ethiopia. His commitment to improving Ethiopia’s legal and cultural protections for women and children continues today. In addition to litigating cases on behalf of survivors in his community, Rehim’s role at the Ethiopian Human Rights Commission involves monitoring the living conditions of children forced to live in prison with their incarcerated mothers. Rehim is currently an intern at Ethiopian Community Development Council, which is one of the nine non-profit agencies that work on Refugee Resettlement under the auspices of the State Department.