Some of the greatest concerns for humanity right now, apart from the ongoing pandemic are the problems of climate change, ecocide and the rise of terrorism and jihadist outfits. Following the terrorist attacks on the United States on September 11, 2001, the threat of radical Islamic terrorism, which has its roots in the Middle East and South Asia, has taken center stage. While these violent religious extremists constitute a small percentage of the population, their danger is real. The International community has not been completely able to neutralise ISIS (Islamic State of Iraq and the Levant). In 2015, ISIS expanded into a network of affiliates in at least eight other countries. Its branches, supporters, and affiliates increasingly carried out attacks beyond the borders of its so-called caliphate. Now once again a ‘new Syria’ is being built in West Africa but the world is ignoring it, world media is not highlighting the plight of the people.

Every time we talk about terrorism, we often limit ourselves to certain territorial aspects, geographies, and countries. Whenever someone utters the word terrorism we usually thinks about the countries that suffer from terrorist attacks frequently (Afghanistan, Iraq, Syria etc.) or countries harbouring them (e.g., Pakistan). We don’t talk about Nigeria where 18 people were killed in a Boko Haram terror attack and 300 school girls were abducted in February, 2021. The International community hardly talk about Mali, where 33 soldiers were killed in a terror attack on 21 March 2021 and we completely forget to talk about Niger where 137 civilians were killed in a terror attack on the same day. We hardly see any international headlines capturing these attacks. Also, we hardly see any news on the subject matter covered by international media on Algeria, Burkina Faso, Chad, or Mali. The list is long but the crux here is that we are ignoring that terrorism is on the rise in Africa in an unprecedented manner. 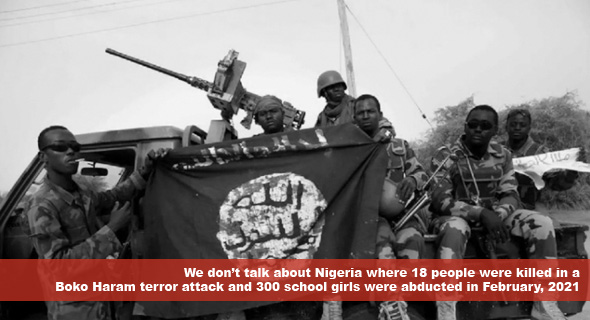 West African countries have been witnessing a devastating surge in terror attacks. According to Verisk Maplecraft report, the last quarter of 2020 alone saw a 13% increase in terror activities in the West African region. The inaction on the part of the global community will have an impact on future security, stability and peace for the rest of the world. If urgent action is not taken and international organisations remain mute spectators, then history will once again repeat itself.  Hence, there is an urgent need to talk about the rise of Jihadist and Terrorism in West African countries especially.

A new battlefield for Terrorists: Towards a new Islamic State Caliphate

West Africa is now being referred to as a new battleground for Jihadists due to an extraordinary spike in terror activities. The War on Terrorism that started in Syria has now moved to Africa. The situation in West Africa is extremely volatile. According to the United Nations, as of August 2020, one million people fled Burkina Faso; in Mali, 240,000 people were internally displaced and 592 people have been killed and in Nigeria, 489,000 people were forced to relocate and 1,245 people were killed.

It is also concerning that the Southern part of African is increasingly becoming a target for terrorists.  The latest terror activity shows that Africa is turning into a Jihadist battleground as it was witnessed in Mozambique, where Islamist militants had taken sieged of an entire town, killed hundreds of people and gained control of a multi-billion-dollar gas project. Terrorists from the Islamic State groups are trying to create a new caliphate in Mozambique.

Jihadists have long been active in Africa. Terrorism on the continent of Africa has been rising sharply over the decade. Non-state (terrorist groups, militias, rebel groups, etc.) have increasingly targeted civilians in their campaigns of violence. The blame for the deaths, mounting violence and a gateway to doomsday for West Africa is on Jihadist terror groups. Most of such groups have ally, associations and marriage of convenience with international terror outfits such as ISIS, al Qaeda and other global terrorist organisations. This is causing further upheaval in West Africa and posing a new danger to global peace.

From where all it started in Africa: Reason behind Jihadist groups

The recent rise of Jihadists in Africa started in Algeria in 1992, when the Algerian military staged a coup to prevent the Islamic Salvation Front from winning the first democratic elections in the country.  The decision of the military pushed the country into a deadly civil war that lasted almost a decade and came to an end in 2002. In 2007, these Islamist fighters built their own organisation and called themselves Al-Qaeda in the Islamic Maghreb (AQIM: Al Qaeda in the West). This group was formed with the aim of overthrowing the Algerian government and setting up an authoritarian regime of an Islamic state. They began funding and making new allies with smaller militant groups in neighbouring Nigeria like “Boko Haram”, the most lethal terror outfit of the world now. Since May 2011, Boko Haram has killed 37500 people and displaced more than 2 million people and has turned 244,000  Nigerians into refugees.

Is their driving force  just an ideology and a goal to establish an Islamic State? The answer may be controversial here because while ideology is the driving force behind these terror organisations, corruption, poverty, unemployment, and other factors cannot be overlooked as to why these groups are growing on a daily basis. The terror outfits make their money from different illegal and immoral activities like abduction, ransom, looting banks, imposing taxes among other things.  For example, according to  Vicki Huddleston, France  ‘paid $17 million ransom to free the French hostages in Mali.

Are we losing the continent of future: Concluding Remarks

We all know that terrorism is undeniably a global problem, and countries all over the world, have been plagued by it for decades. But what is the world doing about it as day by day they are expanding their geographical presence in Africa? Most of the world leaders are making self-interested calculations, with international leaders focusing more on West Asia owing to its strategic relevance, but neglecting Western Africa would cost us more in terms of security concerns in the future. We must not forget that Africa continues to contribute to the global economy in a variety of ways, including 90 percent of the world’s platinum supply and about 9.5 percent of global oil output, among other things.

While the world is looking the other way, the continent of the future is being lost to terrorism as terrorists are continuously hustling to take control of the region. Once again, Mozambique is the latest example to refresh our memory regarding growing jihadist outfits and terror organisations in Africa.  Perhaps economic concerns will force world leaders take necessary steps to curb down terrorism in Africa as the human rights concerns seem not to bother world leaders.

Shelal Lodhi Rajput is currently pursuing law (BBA LL. B (Hons.)) from Symbiosis Law School, Pune, India. He loves to explore and decode the socio-legal aspect pertaining to international relations at national and global level along with other multidimensional interests in the field of law.