In a ground-breaking decision, the UN Children’s Rights Committee recently found that states are legally responsible for the harmful effects of emissions originating in their territory on children outside their borders. The fact that climate change is a global problem does not absolve individual states of their responsibility to reduce their share of emissions. Nonetheless, it found the authors’ complaint inadmissible for failure to exhaust local remedies. The decision was welcomed in some quarters and criticised in others.

The rules on exhaustion of local remedies within public international law and international human rights law are settled. The requirement serves as a manifestation of a state’s sovereignty – that states should be allowed to deal with a claim brought against it using the judicial and administrative mechanisms within their domestic legal order. In human rights law, exhaustion of local remedies is premised on the principle of subsidiarity. The primary avenues for remedying human rights violations are states’ judicial, quasi-judicial and administrative bodies. Only when these domestic avenues are ‘objectively’ considered unavailable, ineffective, unduly burdensome or only obtainable after inordinate delays can the complainants turn to international human rights mechanisms for recourse.

This could not be truer for climate change. States have realised that a prescriptive top-down solution to climate change is unwise and probably unattainable. This fact is acknowledged by the shift in the focus and architecture from the Kyoto Protocol to the flexible, bottom-up approach of the Paris Agreement, permitting states to set their own goals and determine how they will achieve these targets. Frustrating as it is, it is only feasible to take this approach given that responding to climate change engages the political, social, economic and cultural realms of a state.[1] There are neither easy fixes nor one-size-fits-all solutions. 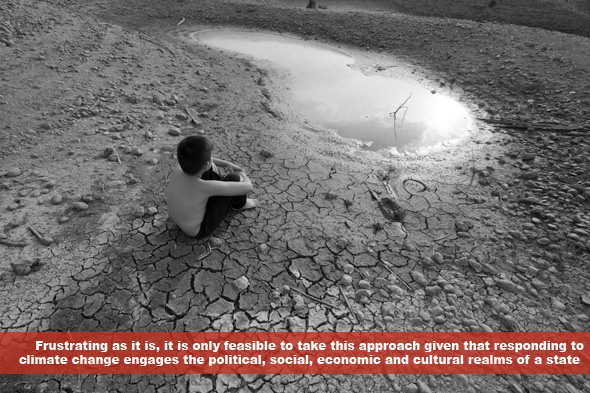 Climate change has been described as a “super-wicked” problem. In order to avoid accusations of a legitimacy deficit, states must be given latitude in designing, adjudicating and executing their climate response policies. Indeed, over 1,000 climate change-related cases have been filed worldwide in the last six years. (For comparison, just 800 similar cases were between 1986 – 2014). Some, like the Urgenda, Sharma, Neubauer and Earthlife Africa, have either yielded incredible victories or cleared pathways for future climate change litigation. Beyond the reflection of the urgency with which climate change must be dealt with, these cases demonstrate the confidence and faith that many advocates and activists still have in their domestic legal systems to address this problem. The UN has acknowledged in a 2020 report that children and youth play a central role in demanding a safe climate and forcing a positive change through national courts.

While the vast majority of climate change litigation to date has taken place in developed countries, the last five years have seen an increase in climate change-related cases in developing countries. Unfortunately, only a handful of those cases have been filed in Africa. Of the few that have been decided, two cases in Kenya and South Africa determined that the absence of a climate change impact assessment was a material flaw in the process leading up to the award of licenses for the construction of coal-fired power plants.

The decision in Saachi is, in our view, the correct one. It reasserts states’ sovereignty, allowing them to find the best formula, appropriate for their circumstances, to the climate crisis. States should not lose sight of the overarching goal of limiting global warming to well below two, preferably 1.5 degrees Celsius compared to pre-industrial levels. This decision is a welcome development for a continent attempting to transition to clean, renewable energy without impeding its social and economic development goals. As countries, particularly in the global south, continue to enact climate change laws, policies and action plans, there will inevitably be debate about their adequacy and how to improve them. Domestic remedial mechanisms still have a major role to play in those efforts.

Nimrod Muhumuza is a doctoral researcher and LL.D. candidate at the Dullah Omar Institute, University of the Western Cape