Early this year, Yach Garang, political science PhD student at the University of Juba authored a blog piece asking ‘will South Sudan be ready for its first democratic elections come 2023?’ According to him, certain benchmarks are critical for South Sudan’s democratic election readiness. These include security stabilisation, enactment of electoral laws, adoption of a new constitution and conduct of population census. While I agree with his ‘benchmarks’, I contend that South Sudan may not be ready for elections, but it is imperative to note that democracy cannot wait for a perfect environment.

This piece, therefore, is addressing those to whom the democratic future of the country remains a priority.

The country has not held election since independence in 2011

South Sudan became 11 years old on 9 July 2022, and no elections have been held yet. The country’s first democratic elections were supposed to be held in 2015, but a sudden conflict erupted in December 2013 only to be halted in 2018 through the Revitalised Peace Agreement. That deal puts an ambitious rebuilding agenda from reform of laws and institutions to adoption of a new constitution and culminating into elections slated for early 2023. The prospects for those elections are, however, unlikely due to the slow pace of implementation of the peace. The parties to that Agreement are hinting at extending it to give room for completion of uncompleted tasks.

However, extending the transitional period may create anxiety among citizens who might view that democracy can no longer be deferred, especially since the country has been in transition since its birth. For instance, the Constitution is transitional, the governance formula is transitional, and the government is transitional, all highlighting the risks of permanence of transitions. Elections could thus break these endless transitions, and they may confer popular legitimacy on the resulting government rather than through current elite contracts. Holding elections is, however, not without challenges and attendant risks. The choice is, thus, between three ‘evils’–one lesser than the other.

The “evils” to choose from

Evil 1: Extend the Revitalised Peace Agreement and risk perpetual extension as it is not guaranteed that the remaining tasks under the peace deal will be completed within the extended transitional period. Even more, an extension without serious commitment from political parties that are signatory to the agreement risks disenfranchising the people and friends of South Sudan.

Evil 2: Hold elections at the end of the transitional period and develop a plan to mitigate potential risks of disagreements developing into a conflict. This option also carries risks, including the charge that the country is unprepared for elections.

Evil 3: Allow the peace agreement to naturally end and start discussion on a new political framework. Yet, this option might open another pandora box of political transition which should be avoided. 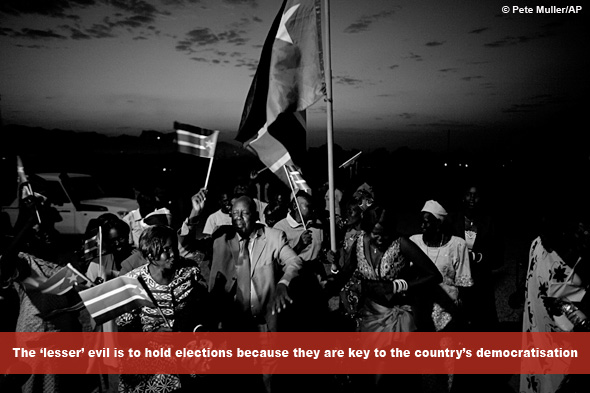 Whereas elections do not necessarily result in democracy, holding them will be more beneficial than deferral. The first and third “evils” are undesirable choices because they delay democracy and South Sudan cannot afford to be locked in endless constitutional and political transitions. The lesser ‘evil’ is to hold elections at the end of the transitional period. To do so, the government should first prioritise humanitarian relief to the affected populations and create necessary conditions for security. This would allow people to take part in local peacebuilding efforts and rebuilding of the economy. In parallel with this process should be the enactment of necessary legislation informed by popular views of the people procured through opinion polling on elections to gauge public perceptions. The election law should facilitate reform of the Election Commission and includes the following proposals:

Last words–There is no silver bullet, but just strategies that work

Election pessimism is animated by an ambitious imagination that the ‘standard template’ for assessing election readiness in a democratic context is attainable in contemporary South Sudan. That is simply farfetched. We must start from a humble beginning where the country is now to where it ought to be. The first, second, and perhaps third elections in South Sudan may not produce democracy, but they will incrementally build civic-government relations and galvanise people around key issues, rather than sensational issues that currently pre-occupy the political landscape–tribalism, militarism and conflicts.

The optimists, myself included, are aware of prospective dangers associated with holding elections in a polarised context, including potential for conflicts, further divisions, and the fact that elections may not be free and fair. These dangers, notwithstanding, the strategies suggested above could be adopted to mitigate against those risks. Not holding elections denies the nation its much needed take-off to commence a nation-building agenda focused on wealth creation and shared prosperity.

Joseph Geng Akech is a South Sudanese researcher in human rights, constitutional designs and transitional justice. He holds a Doctor of Laws (LLD) in constitutional law, and he is an alumnus of the LLM in Human Rights and Democratisation at the Faculty of Law, Centre for Human Rights, University of Pretoria, and reachable at josephgakech@gmail.com.

Views in this article do not represent the position or endorsement of institutions which might be affiliated with the author.