*This article was originally published in Turkish on IHO Blog. Translated by Virtus Çeviri

The right to housing is a fundamental human right emphasised in both the Constitution of the Republic of Turkey and the Universal Declaration of Human Rights.[1] Although it does not include details on how this right will be exercised, how fair access to it will be ensured and how it will be secured, Article 57 of the Turkish Constitution reads: “The State shall take measures to meet the need for housing within the framework of a plan that takes into account the characteristics of cities and environmental conditions, and also support community housing projects.” The United Nations Special Rapporteur on the Right to Adequate Housing expands the definition of the right to housing as “the right to housing adequate for habitation” and defines the necessary conditions of housing for a sustainable and dignified life. Before discussing the above-mentioned conditions and how they relate to social justice, it is worth tackling the meaning the word “housing” assumes today.

Defining the Problem of Housing

Access to housing has become a global issue, especially after the COVID-19 pandemic. The experience of widespread and deepening housing problem has led to the identification of this problem as a housing crisis. In their seminal work In Defense of Housing, David Madden and Peter Marcuse elaborate on the word “crisis” and analyse why the definition of housing crisis should be used with caution.[2] They argue that the word “crisis” describes an extraordinary situation and that in fact the “oppressed” have always experienced this crisis. In other words, housing has always been an aspect of injustice for disadvantaged groups in society. On the other hand, the authors state that the term “crisis” creates the perception of an isolated malfunction in an already well-functioning system. Housing has never been presented in a way that prioritises social justice anyway, and has virtually served as a useful apparatus of capitalist spatial development for states. Therefore, even though housing is defined as a right, it has steered away from the focus on basic needs and use value and has become a commodity where exchange value is prominent, financialised, and a kind of privilege. 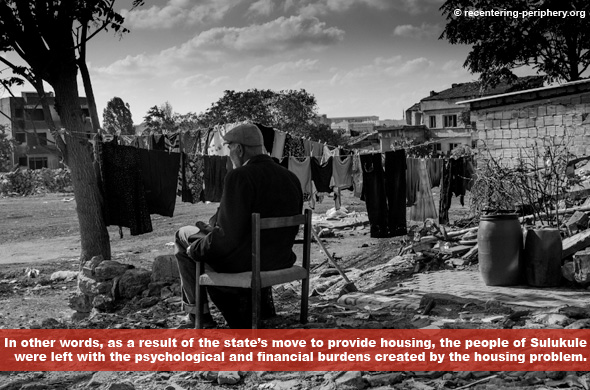 Madden and Marcuse argue that there is no direct correlation between states recognising the right to housing and actually providing access to housing for all.[3] Moreover, they emphasise that the right to housing is used to ensure and legitimise the functioning of the system. This is apparent in the functioning of housing projects in Turkey. For example, the Sulukule Urban Renewal Project was proposed on the grounds that it would make the neighborhood more livable. The project’s promise of “hygiene” was of course not limited to the demolition of old buildings and the construction of new ones. The people of Sulukule were forcibly evicted and given the “chance” to own a house in the TOKİ (Housing Development Administration) houses built in Kayabaşı, on the periphery of İstanbul. The neighborhood residents, who were given housing through lot draws organised to resemble festivals, now had “sterile” houses, but had lost the solidarity relations and livelihoods woven within the space itself in Sulukule. And they went into debt because of housing expenses. In other words, as a result of the state’s move to provide housing, the people of Sulukule were left with the psychological and financial burdens created by the housing problem. Sulukule is certainly not an exception in the practice of housing production in Turkey. We know that the wave of urban transformation that rose in the 2000s violated the right to housing, especially in poor neighborhoods, dragged people into a desperate spiral of poverty, and had striking social and psychological effects. It is important to analyse all these practices, to establish the relationship of housing – which is more than just a roof over our heads – with other social rights, and to comprehend the injustice caused by problems of access to housing as a whole.

Right to Housing and Social Justice

So, what do we mean when we argue that housing is not just four walls and a roof? The UN’s concept of the “right to adequate housing” provides an important framework here. The institution defines the seven conditions necessary for housing that will enable a life worthy of human dignity as follows:

These criteria may of course vary according to living standards, habits and needs in each country. However, the concept of the right to adequate housing is an important ground for discussion as it emphasises the socialness of housing beyond its status as a product of construction. It helps us to understand how housing has become a means of continuous gain for the privileged while creating a spiral of injustice for lower income groups and disadvantaged groups in society. Refugees, for instance, are forced to live in damp basements that do not even function as housing, where toilets and kitchens are adjacent, or in buildings that are unsafe against earthquakes. Being forced to live in such spaces causes them to suffer from pulmonary diseases such as asthma and increases the vulnerability inherent in their lives as their access to the right to health is also problematic. Although earthquake is the most urgent agenda item in Istanbul, the number of earthquake-proof buildings in the city is quite low and not everyone living in the city has economic access to these buildings. LGBTI+ persons are discriminated against during the house-hunting process simply because of their identities and are eventually forced to live in unhealthy housing that does not meet their needs. The buildings with full physical accessibility are not built in the city center due to the lack of public oversight and the rapid construction cycle. Accordingly, people with disabilities are forced to live on the periphery, and they are prevented from moving safely in the city because basic urban infrastructure such as transportation vehicles, sidewalks and streets are not accessible and safe. On the other hand, if we take housing to mean not only a house but also as spaces that meet the need for shelter, the scope of disadvantaged groups expands even further. Recently, the students, who have brought the problem of access to dormitories and housing to the agenda with the We Can’t Shelter Movement, have once again demonstrated the direct relationship between the housing problem and the right to education. To conclude, the housing problem exacerbates injustice by reproducing social inequalities.

A New Kind of Polarisation: Tenant and Landlord

Today, tenancy is one of the most pressing housing issues. There is no doubt that tenants are now a vulnerable segment of society. Just as homeownership is seen as a sort of guarantee, investment and security, being a tenant carries a kind of precariousness. Tenancy encompasses a kind of precariousness created by the state of transience, not being permanent, and being subjected to arbitrary practices. So much so that one of the main motivations for becoming a homeowner is to “no longer be a tenant”.

Rising rents amid the economic crisis and the increase in tenancy while the homeownership rate declines[4] both raise the housing affordability debate and pit tenants and landlords against each other. While homeowners are reluctant to rent their properties “below their value”, tenants are struggling to find rental housing they can afford with their current income. The tension between these two groups also creates the illusion that the problem of rental housing can be solved by agreement between landlords and tenants. The obligations of the state, which should be the main answerer of the problem, are overlooked. This is because the housing problem is attributed to factors such as inflation that seem impossible to intervene in. This perspective externalises the problem, obscuring the fact that the state does not have a fair housing policy. On the other hand, the government’s solution to the housing problem is to encourage individuals to have their own house. Underlying this approach is the idea that “The only way to eliminate your housing problem is to own a house.”

In conclusion, the housing problem is confined to affordability. This situation prevents the interlocutors of the problem from engaging in other discussions such as the quality of housing, the facilities it offers, its availability and accessibility. However, the right to housing means much more than affordability and is a basis for demanding much more. Madden and Marcuse argue that, despite the danger of the right to housing remaining an abstract and unrealisable right, its constant demand can be a way to fight against the ignorance of the housing crisis and an impetus for concrete action.[5] To cut to the chase, instead of assuming that we should settle for the housing that fits our budget, we need to popularise the idea on the access to housing such that its qualities meet the necessary conditions to live a livable life with human dignity from a human rights perspective. Organising and multiplying the demand for the right to housing is an important starting point for exposing the problems of the system and changing them.

[1] The “right to respect for private and family life, home and correspondence” enshrined in the European Convention on Human Rights broadly defines housing as a place where individuals have “sufficient and continuing” links. Accordingly, student dormitories or hotel rooms, for example, are also places of accommodation that function as housing.

[4] Although homeownership is both a state-encouraged and socially desirable option, according to TurkStat data, the homeownership rate declined from 60.7 percent in 2006 to 57.8 percent in 2020. The rate of tenants, which stood at 22.1 percent in 2014, increased to 26.2 percent in 2020. See Euronews (2022). “Konut satışındaki artışa rağmen ev sahipliği oranı düşüyor, kiracılar artıyor” [Homeownership rate falls, tenants rise despite increase in house sales], https://tr.euronews.com/2022/04/28/konut-sat-s-ndaki-art-sa-ragmen-ev-sahipligi-oran-dusuyor-kirac-lar-art-yor, [Accessed July 2022]. On the other hand, according to a study published by the İstanbul Planning Agency in 2022, those who rented a home in 2021 faced 66.2% higher rental costs than those who rented a home in 2020 and before. See İstanbul Planning Agency (2021). Konut Sorunu Araştırması: İstanbul’da Mevcut Durum ve Öneriler [Housing Problem Research: Current Situation in İstanbul and Recommendations]. İstanbul: Kültür A.Ş., https://ipa.istanbul/wp-content/uploads/2021/09/IPA_KONUT_REHBERI-web.pdf, [Accessed July 2022].

About the Author:
Bayhan graduated from Mimar Sinan Fine Arts University’s Department of Urban and Regional Planning in 2011. She completed her master’s degree at MSFU’s Department of Sociology. She worked as an editor at arkitera.com. Bayhan was the editor of beyond.istanbul publications at the Center for Spatial Justice. She has been working as Urban Policies Programme Coordinator since 2019.