In the early hours of Sunday 11 September 2022, the Jagersfontein diamond mine tailings dump in the Free State failed by bursting as a result of a sudden collapse of the dump embankment walls. The cause for this collapse remains unknown at this point. The spill of the tailings greyish mud is reported to have stretched widely covering a considerable portion of land surface area of the Jagersfontein farm community. At the time of writing this piece, evacuations were still ongoing in the area and the concrete impact and damage report of the incident was not yet ripe. However, the little that could be ascertained from the Department of Mineral Resources and Energy (DMRE) Minister, Gwede Mantashe’s press briefing, where he presented a preliminary incident report, is that at least 28 people suffered minor injuries; while over 40 people were critically injured and hospitalised, with over 5 confirmed fatalities as of that fateful Sunday. In terms of infrastructural damage, the Minister reported that over 9 houses were completely swept away by the spill while around 20 houses were severely damaged. As it should be, this major crisis gives rise to critical questions of accountability, as to who must be held accountable for it and how exactly that accountable person or entity must respond. But not only that, more action is yet to be witnessed on the side of the DMRE in ensuring that this incident is not left unaccounted for and that similar incidents do not recur in the future. This might not be an easy task for the DMRE given the wrestling history it has with De Beers over the Jagersfontein dump, as will be briefly discussed below. What the DMRE actions and the content informing them would entail this time around is yet another fascinating point to observe as the case develops. The aim of this piece is to share some insights into these important issues.

What do we know already about the Jagersfontein tailings dump?

We certainly know that the Jagersfontein tailings dump is not entirely new in the limelight. In 2007, the Free State High Court sitting in Bloemfontein was called upon to determine several issues in relation to this dump:[1] who is the rightful owner of the dump? Considering that the dump’s construction and existence dates way back beyond 2002, thus falling under the old order mining regulation, is the dump regulated by the current framework legislation i.e., Mineral and Petroleum Resources Development Act 28 of 2002 (MPRDA)? Is the MPRDA, in its transitional provisions, clear and unambiguous on whether the mine tailings dumps are to be regulated in terms of its provisions or not. Flowing from the latter, whether the applicant was supposed to apply for the conversion of its old order prospecting right to a new prospecting right regarding the dump?

This court application was brought by De Beers (the applicant). The applicant’s contention was essentially that it was the owner of the dumps having acquired them in 1940 in terms of the Minerals Act of 1991 and Precious Stones Act of 1964. The applicant contended further that the mine dumps on the land were movables in that they were man-made and not naturally inseparable from the land, hence the DMRE could not grant a mining right to any third party in terms of the MPRDA to prospect or mine them. The applicant went on with its argument that the dumps were therefore not subject to the provisions of the MPRDA and the DMRE has no jurisdiction over them. It has to be for this reason that the applicant declined an invitation from the DMRE to apply for the conversion of the rights in respect of the dump. In coming to its decision, the High Court ruled overwhelmingly in favour of the applicant. It declared and affirmed De Beers as the rightful owner of the dumps. The court further ruled that the dumps are indeed movable property of De Beers, for there was no intention whatsoever by the applicant to permanently affix them to the land and they could be removed without causing any collateral damage to the land. In reasoning this further, the court also found that the tailings were not discarded to accede to the land but that they were kept in abeyance for retreatment at a later stage when such endeavour is economically viable. 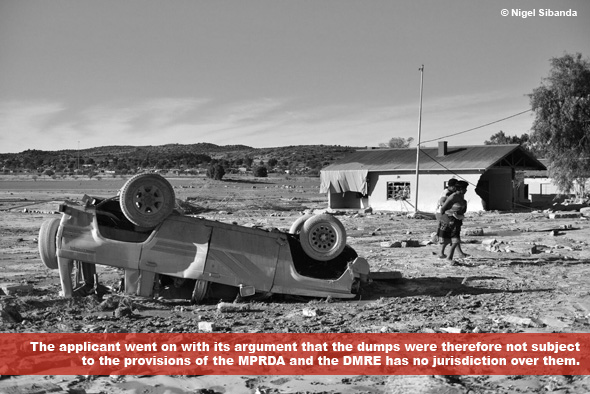 In his press briefing in response to the burst crisis, the DMRE Minister emphasised his long-held criticism against this judgment and indicated that there is a critical need for it to be reviewed and set aside and that this is something the DMRE consider pursuing. Although I do not know his reasons, the Minister’s criticism would prove correct. For me, the reasons why this critique may hold is that this judgment completely ignored the critical debates around the credence accorded the subjective intention when determining whether accession occurred or not. This was a missed opportunity for the court to clarify the subjective intention and its weight in the context of accession from a more authoritative point of view. It is also not quite convincing if the court correctly applied the factors for determining accession generally and in the context of mine dumps, which remains a highly contested topic.

Now we know, from this judgment, that the dumps belong to De Beers. We also know that the DMRE, as the state regulating authority, has no say or jurisdiction whatsoever over the dumps for they constitute a movable property privately owned by De Beers. This is the position we must fathom out and bear with, no matter how legally untenable and wrong it may be, until such time that this judgment is successfully reviewed and set aside. But not only that, we also know that De Beers, being declared owner by the court, decided to sell the dumps 3 years later after this judgment to a company registered as Superkolong Consortium in 2010, which is now the current owner of the dumps.

It is equally important to reflect on the unknowns at this point. Assumption is that the dumps must have been insured by the owner – Superkolong. We do not know whether this is the case. We also do not know the hazard categorisation of the dumps based on consequence of failure and, if there is such categorisation, the guidelines that were followed. Considering that the dumps are quite oldy, we are yet to also know whether they at any point in their history failed to be confirmed as stable or experienced serious stability concerns as assessed by independent engineers and, if yes, what measures or steps were taken to address that threatening instability. We also do not know whether a formal analysis of the downstream impact on communities, surrounding ecosystem, environment and infrastructure in the event of a catastrophic failure (which has now occurred) has been undertaken on these dumps and when did this analysis take place if at all. We also do not know if a closure plan is in place for these dumps and, if it is, whether it includes long-term monitoring and maintenance of the dumps and whether such monitoring and maintenance actually happened. So, it would appear, there are a host of issues we do not know about and this means more accounting for the owner of the dumps.

Now we know about Jagersfontein and its recent tragedy, then what?

Once everything is said and done, someone must account for the Jagersfontein tragedy. It is pretty straightforward that it does not need further discussion that the owner of the dumps must be held accountable and take full responsibility for the mess. It is already indicated that the assumption is that the dumps must have been insured, as the Minister observed quite correctly. In this way, then, it will be simple for the affected community, households and individuals for they are now assured of their compensation packages to restore their livelihoods beyond the tragedy. De Beers might be spared. As for the DMRE, it is hard if not impossible to engage in a conversation about holding mining companies accountable without making reference to its role in that regard.