On 1 September 2022, a full bench of the Division of the High Court, sitting in Makhanda and presided over by Mbenenge JP, handed down a significant judgment in respect of a review petition that sought to challenge the lawfulness of the granting of an exploration right for the exploration of oil and gas in the Southeast Coast by the DMRE to the multinational petroleum company – Shell South Africa (Sustaining the Wild Coast NPC & Others v Minister of Mineral Resources and Energy & Others Case No.: 3491/2021). The relevant facts of the case can be summarised as follows: The petroleum company was awarded an exploration right on April 2014. The right was renewed two times, in December 2017 and again in July 2021. Further, the right was supposedly awarded in terms of the applicable laws i.e. the Mineral and Petroleum Resources Development Act 28 of 2002 (MPRDA) which requires, inter alia, environmental impact assessment and authorisation. It would appear that the only way Shell could exercise its exploration right was by conducting a seismic survey off the Southeast coast that was planned to commence in December 2021. Loosely described, the offshore seismic survey mechanism involve using explosive sound-waves using air-guns directed downwards as part of a mapping technique to determine whether oil or gas deposits may be present deep below the seabed of a surveyed area. It is exactly at this point where the contention arose between, on the one hand, the local customary communities and public interest entities and, on the other, the DMRE and petroleum companies.

The seismic survey process did not find favour from the local communities living along the targeted coast and the public interest entities that advocate for nature conservation and protection of the coastal environment. In the main, the applicants (local communities and public interest entities) contended that the survey, if left unchallenged, would have negative impact on the marine life and biodiversity; the local communities’ livelihoods and their constitutionally and customarily held rights on the sea, such as of customary fishing, cultural and religious practices. The applicants contended further that the survey had the potential to cause sea pollution, climate change, and negatively impact on national energy policy and the future development of the region should significant quantities of oil and gas be discovered by Shell. Fast forward, the applicants then launched urgent proceedings with the High Court seeking an order in respect of two issues: First, interdicting the respondents from undertaking the survey on the basis of its harmful effect on the marine life, environment and communities’ livelihoods, culture and heritage. Secondly, for the awarding of an exploration right by the DMRE to be declared unlawful on the basis that Shell did not have environmental authorisation in terms of National Environmental Management Act 107 of 1998 (NEMA). Not only that, but that Shell had also failed to consult with the local customary communities prior to the decision granting the exploration right being taken and that the survey. 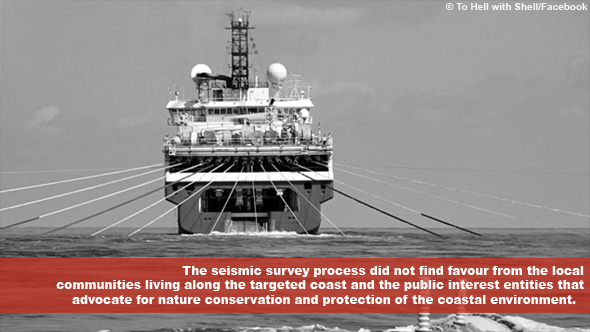 In its attempt to defend the exploration right, Shell contented that it was fully compliant with the relevant legislative framework. It argued that it was under no obligation to obtain the environmental authorisation in terms of NEMA in addition to the environmental management program in terms of the MPRDA. Shell argued further that it had made available the latter program to the interested and affected parties and invited their comments about the project. In coming to its decision, the High Court ruled in favour of the local communities living in the coastline. It found that Shell had indeed failed to ensure meaningful consultation with them. As a result, the DMRE’s decision to have granted an exploration right was declared unlawful and set aside on the basis that the right was awarded through a consultation process that was “inadequate and substantially flawed.” Essentially, this implied that Shell is interdicted from continuing a seismic survey in the Southeast coast. As per the words of Mbenenge JP, the “meaningful consultations consist not in the mere ticking of a checklist, but in engaging in a genuine, bona fide substantive two-way process aimed at achieving, as far as possible, consensus, especially in relation to what the process entails and the import thereof.”

This proposition constitute a further endorsement of the emerging jurisprudence on meaningful engagement from earlier cases such as Bengwenyama Minerals & Others v Genorah Resources & Others 2011 (3) BCLR 229 (CC); Maledu & Others v Itereleng Bakgatla Mineral Resources & Another 2019 (1) BCLR 53 (CC) and Baleni & Others v Minister of Mineral Resources & Others 2019 (2) SA 453 (GP). Seeing the South African courts developing a consistent approach to meaningful consultation is a great observation for one to make. It sends a strong message of deterrence to the mining and extractive companies to consider the rights of local communities from a serious note, lest they suffer great financial loss emanating from halted operations as a result of injunctions. The other take-away from this judgment is that the loss suffered by extractive company cannot justify the infringement of constitutional rights of the affected communities. The court was of the view that “where constitutional rights are in issue, the balance of convenience favours the protection of those rights.”

In conclusion, the Shell judgment is an important decision that should not be seen as an impediment to exploring the offshore energy deposits. If anything, it should be seen as the necessary guidance on the approach that oil and gas extractive companies ought to follow in their quest to secure exploration permits of oil and gas in a lawful manner. The judgment is yet another significant reminder that the voice of local communities and meaningful consultation with the relevant stakeholders is critical in the process leading to the granting and eventual exercise of any mineral right, including the exploration right. The judgment also quiet fervently reflects on the critical need for the extractive companies to be alive to and aware of the nature and structure of the affected communities and to be sure to know the manner in which decisions are taken in a community (i.e. customary community decision-making process). This can vary widely from one community to the other. In this way, the company would know when the consultation process is adequate, fair and transparent; whether the persons consulted are rightful and have been properly constituted; whether consent has been given by the relevant representatives authorised to do so. Gone are the days where traditional leaders would willy-nilly make decisions about the communities without first having consulted and engaged with them.