In an unreported judgement in South African Legal Practice Council v Teffo (10991/21) [2022] ZAGPPHC 666, Adv Malesela Teffo was removed as a legal practitioner. A total of 22 complaints from 2019 to 2022 were filed with the Legal Practice Council (LPC), a statutory body responsible for regulating the legal profession, against Adv Teffo. These include intimidation, assault, contemptuous behaviour, bringing disgrace upon the Court’s moral authority, violating the Legal Practice Act 28 of 2014 (the LPA) on numerous counts and misappropriating of clients’ funds. In this regard, the LPC filed a motion with the High Court to have him disbarred. In its notice of motion, the LPC outlined the basis upon which they seek an order to strike Advocate Teffo off from the roll of legal practitioners. Adv Teffo replied with a bare denial in essence pleading not guilty to all these complaints.

The Court was called upon to decide whether Adv Teffo was fit and proper to continue to practise and decide in the exercise of its discretion whether he was to be removed from the roll or merely suspended from practice.

Section 22(1)(d) of the now defunct Attorneys Act 53 of 1979 left the removal of attorneys from the roll to the discretion of the court to decide if the particular attorney is not a fit and proper person to continue to practise as an attorney. This had to be done on application by the society concerned to the court within the jurisdiction of which the attorney practises. The LPA does not contain a provision similar to section 22(1)(d) of the Attorneys Act. However, section 44(1) of the LPA provides that the LPA does not derogate in any way from the inherent disciplinary powers of the High Court in respect of the conduct of its officers. The courts had these disciplinary powers even before the enactment of the Attorneys, Notaries and Conveyancers Admission Act 23 of 1934 and the subsequent insertion of section 28 in 1964. The principle underlying section 22(1) of the Attorneys Act that a person may be struck from the roll if they no longer fit & proper, remains equally applicable under the LPA. The application of section 22(1)(d) involves a threefold enquiry as enunciated by Scott JA in Jasat v Natal Law Society. In essence, the three-legged enquiry calls upon this Court to first decide as a matter of fact whether the alleged offending conduct by the legal practitioner has been established and if the Court is satisfied that the offending conduct has been established, a value judgment is required to decide whether the person concerned is not a fit and proper person to practise as a legal practitioner. In the second leg, it must decide in the exercise of its discretion whether in all the circumstances of the case the legal practitioner in question is to be removed from the roll or merely suspended from practice. Thus, this is ultimately a question of degree. In the last leg, the Court must exercise its discretion based upon the facts before it and the facts in question must be proven on a balance of probabilities. The facts upon which the Court’s discretion is based should be considered in their totality. The Court must not consider each issue in isolation. 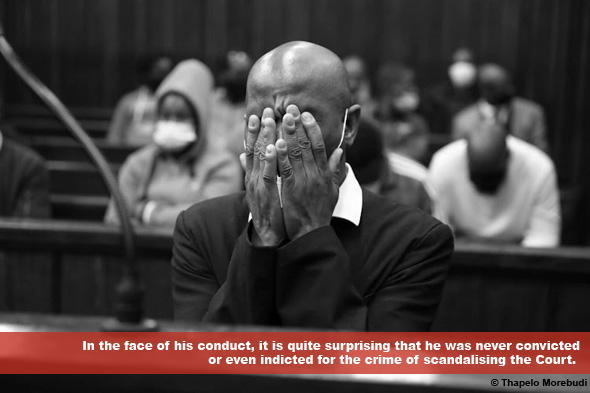 The Court began by finding Adv Teffo guilty of contravening paragraph 27.4 of the LPC’s code of conduct in that he accepted payments directly from clients without receipt of a brief from an attorney. The Court was also satisfied that he consulted with clients without acceptance of a brief from an attorney, instead, he accepted a brief directly from clients, thus contravening section 34(2)(a)(i) and paragraph 27.2 of the LPC’s code of conduct. The misappropriation of the client’s funds constitutes theft, and this portrayed dishonesty and a lack of integrity on his part, the Court held. The Court was convinced that the LPC had laid sufficient grounds for the advocate to be struck off. This brought the Court to the second leg. The Court found that no exceptional circumstances exist for the imposition of the penalty of suspension. Adv Teffo’s acts of misconduct were serious and dishonest in the Court’s opinion, but the determining factor is the protection of the public. Adv Teffo manipulated and forced the clients to pay money into his account or accounts of other people to the extent of threatening them. Additionally, his conduct was repetitive and he failed to provide satisfactory explanations. The Court found that his conduct warrants a finding that he be struck off from the roll. The Court, in the third leg, found that it was limited to deciding the case on information and facts before it as Adv Teffo failed to provide plausible explanations of the serious accusations that were levelled against him.

This is obviously a welcome ruling. Despite the serious and overwhelming number of complaints that were revealed before this Honourable Court which themselves give rise to a distinct impression that he is indeed ill-suited to be a lawyer as he lacks the moral character and fitness required of a person of his position, his conduct during the famous Senzo Meyiwa trial has caused the jurist profession great embarrassment. It has also brought the good name of the legal profession into disrepute. His derogatory behaviour and the disregard for the authority of the Court and the presiding judge, His Honour Judge Maumela, even going as far as accusing him without basis of bewitching him amounted to scandalising the Court. In the face of his conduct, it is quite surprising that he was never convicted or even indicted for the crime of scandalising the Court.

Perhaps deserving of note is the fact that motion proceedings are not appropriate for cases such as these. I am of the view that action proceedings can further the administration of justice as the removal of practitioners from the roll is an extreme measure and has far-reaching consequences. An application proceeding denies one the opportunity to rebut the allegations levelled against them by the calling of witnesses including character witnesses and lead other relevant documentary evidence. This can present an opportunity for an embattled practitioner to subpoena relevant witnesses and even attempt to reach a settlement agreement with the LPC before the judgement is given and possibly remain on the roll of legal practitioners on the condition that they correct their wrongdoings.

Furthermore, the requirement by courts of absolute honesty and integrity is undesirable as it has the potential to penalise practitioners even in the slightest of mishaps even more so for experienced lawyers who are held to even a higher standard as proven by case law over the years. In this regard, courts must take care to consider the gravity and nature of the misdeed, remorse or the absence thereof and personal circumstances such as the ability to earn money and support their families as an important component of their right to human dignity in exercising its discretion and avoid giving excessive weight to the protection of the public as the nature of the conduct might sometimes be of such a nature that striking off is not the appropriate sanction. To this end, lawyers must be struck off the roll for repetitive and serious misdeeds otherwise a suspension, admonishment or censure are appropriate punishments in all other instances.

Sandile Nhlengetwa is a final year Legum Baccalaureus (LLB) candidate at the University of the Western Cape. He has been honoured three times for the three academic years he completed thus far by the Golden Key International Honour Society for achieving high marks. He has also been awarded the Dean’s Merit Award twice. He currently serves as a member of the Moot Court Society.